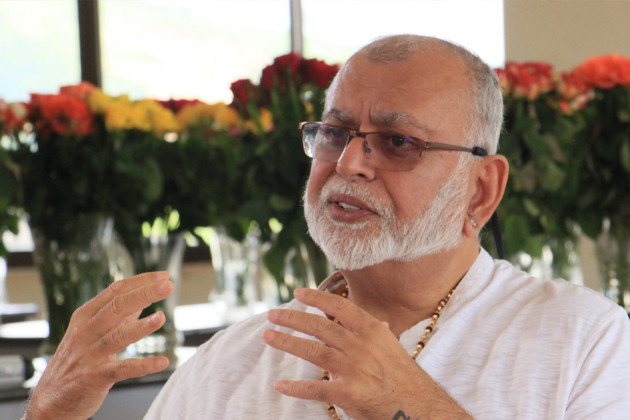 East Africa’s richest man, Sudhir Ruparelia is advocating a ban on the import of luxury goods into Africa to help it ride out the gathering world economic storm.

Dr.Sudhir says he has seen it all in the last 40 years, right from the expulsion of Asians from Uganda; recession in Britain; oil crisis; power crisis; currency crisis; COVID and 9/11.

From his base in Kampala, the businessman who built his mega Ruparelia Group Empire brick by brick looks on at the war between Russia and Ukraine with growing concern. He sees it going on for another year creating even more economic chaos and uncertainty for the world.

“The next level of cost increase in Europe is going to be interest rates. When interest goes up you are going to see Europe and America getting into very heavy recession,” Sudhir says.

It is likely to be rough for Africa, he warns. “It is just getting crazy. Whoever wanted the war in Europe, they will find it is backfiring on the whole world, ” he says.

“Lockdown in China is not helping, contributing to rising building costs. They’ve gone up 20 to 40 percent worldwide. Largest manufacturers in the world in air conditioning to furniture. We have a huge shortage because they have broken the supply chain… I saw the depression in England, in 1972, during the time of Mr. Heath. I think we are getting there.”

For years the nations of the West preached to Africa not to print money and weaken their economies, Zimbabwe-style.

“This is common preaching among the countries of Africa telling them not to print money. The minute COVID and the lockdown hit Europe, in March 2020, and the way they were paying people to keep at home and the businesses floating, I knew this is the beginning of inflation and after two years they are going to raise so many taxes, on everything, the short leave honeymoon is becoming a hard one to live with,” he says.

“I see recession is not only looming – it is right at your back door!”

What can we do? Ruparelia believes the rich and powerful of Africa need to respond with austerity and self-denial in the interests of all.

“I think where luxury items are concerned countries should ban them. You need to have austerity measures. I don’t think one should actually bring in these luxury items- we should ban them! I am talking about your beautiful rugs your perfumes I think those you can do without. Electronics for leisure purposes, I think they need to be controlled. “

What would Ruparelia say to the politicians?

“I think, are you worried about a few people and their needs or are you worried about the lives of 46 million Ugandans? If I was in their position, I would look at the masses and say: we need to have foreign exchange to import cooking oil; foreign exchange to import salt – our two basic ingredients and the rest of the food we have locally. If you can make sure they are brought in at a reasonable price – and a bit of wheat because we need bread. “

Is Ruparelia ready to practice what he preaches?

“I would definitely be willing to sacrifice luxury. I am actually a very simple guy, you know, I don’t have much luxury I use for myself,” he says, adding; “All these people have so much stock anyway, so for six months, or 12 months they are not going to miss it.”

The war in Ukraine and the economic turmoil that goes with it has caused havoc with fuel prices, supply chains, and supermarkets. Ruparelia is facing a loss of up to $5 million from his flower business, alone because rising prices in the supermarkets cut back demand.

Uganda, according to Ruparelia, is weathering this storm with its fertile soil producing 300 tonnes of food a month – enough to export to hungry shoppers in Dubai, Europe, and Britain.

Many entrepreneurs are looking for shelter in cryptocurrency.

“It is not only supposed to be the currency of the future, but also something in which a lot of people have faith. My son came to me and said, listen, put a few million in it and I said I’m not a gambling man like that! Of course, when it reached over 60,000 he said: ‘Look I told you!’ We were discussing it the other day and I said, OK, you are telling me now! “

Is cryptocurrency still a no, no?

“It is for me now. You see when the recession hits all these governments are going to look for more taxes and I don’t think cryptocurrency is going to escape it.”

So what does Ruparelia – one of the richest men in Africa worth about $1.2 billion – advise African entrepreneurs in these lean and sticky times?

“Cash is king and still my long-term advice is real estate. Because right now the cost of construction and building has gone up by between 20 and 30 percent. So if you are sitting on real estate, your equity has grown by 20 to 30 percent.”

Looking further ahead, Ruparelia says oil will prove the economic salvation of Uganda. Investors have sunk $15 billion into oil in Uganda and he believes the black gold will flow in 2029.

“Our president is very foresighted and the oil companies were pushing him not to have a refinery and saying why don’t you just let the crude oil go and the president said: ‘No, I must have a refinery in this country’ Finally, he has got one. We will have a refinery, refining 60,000 barrels a day, not only for Uganda but also for the countries adjoining our borders. Now when you are refining your oil you are going to have a lot of by-products: chemicals , fertilizers, plastics, petroleum jelly and so on…Another by-product sought after is bitumen for making roads. A hundred major industries are going to crop up in this country.”

And the so-called oil curse?

“Oil in a country like Nigeria, oil came in when a lot of these countries didn’t have a system. It was abused quite a lot for the benefit of the few. Now in Uganda in the last 30 years the government has put in so many systems so if a ministry wants to procure anything, like a conference, they have to go through a tender system. You go through a whole system and there are checks and balances so if somebody is aggrieved, they can go and complain…I am confident that when oil does come 10 to 15 percent will be here and there and I don’t think it is bad for this part of the world, but more than 85 percent will be utilized properly.”

Why Kampala Parents’ School is not only a school but an education hub that is ready to streamline your child’s future.