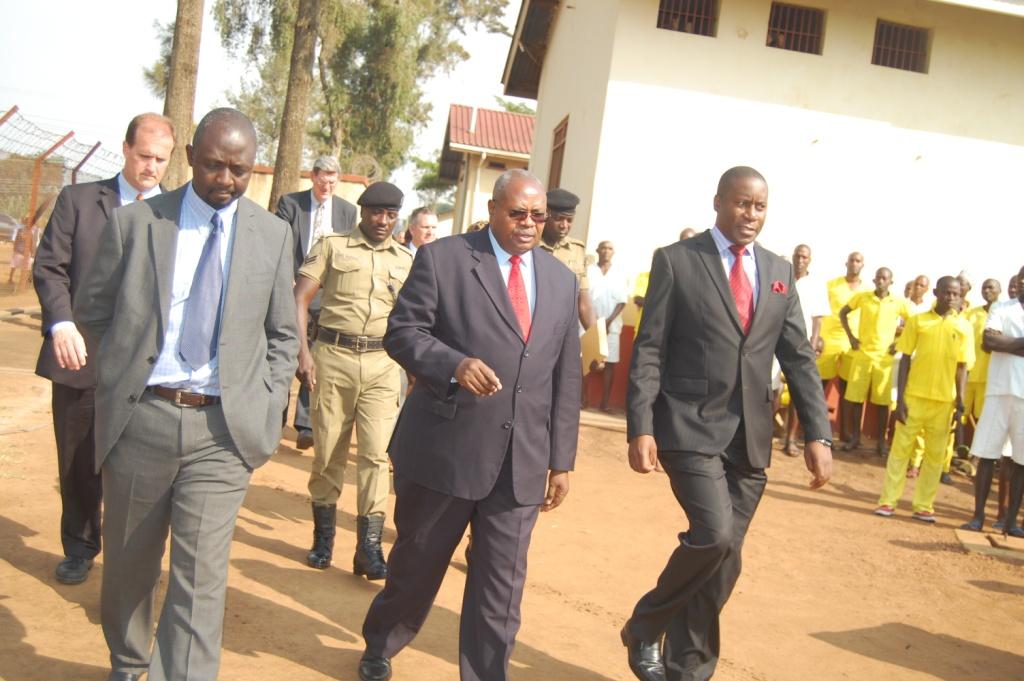 Don’t insist on imprisonment of convicts -PJ Bamwine urges prosecutors
Justice Yorokam Bamwine the Principle Judge of Uganda has warned lawyers and prosecutors who insist on Imprisonment of defendants instead of opting for other means in a pre bargain process which has been gazzetted as a law by the rules committee of Judiciary.
Bamwine made these warning remarks during the launch of plea bargain process where defendants with their lawyers and state prosecutors sit and negotiate about the lenience sentence accordingly to the case committed after the defendant has pleaded guilty, this was done at Mbarara Main prison in Mbarara town on Wednesday.
Bamwine said that prosecutors should not insist on just imprisonment even when the defendant has already pleaded guilty, that they should opt for other fines and cautions so long as it is provided for in the laws of Uganda.
“We initiated this Plea bargain process in 2014 as a way to decongest prisons and reduce on the case back log, in the whole country we have almost 10,000 committals cases waiting for trail, in Mbarara main prison I have been told that they are 809, remember on top of that we have few judges plus fewer funds, so lawyers and prosecutors should help to first truck this process, instead of insisting on just imprisonment and the years spent on remand should be considered during the plea bargain process and be deducted on the sentence” Bamwine stated.
We have been told that so far Mbarara central main prison is supposed to reside 360 inmates as its capacity but apparently its has 1469 inmates, among these include 1037 who are on remand, 142 on theft cases, 888 on capital offences, 809 committals and 384 Convicts. They have disposed off 2000 cases country wide through this process, for Mbarara its 250 case that have been handled.
One of the Inmates identified as Pastor Benedict Asingwire told the team form Judiciary that they had a challenge of lawyers who come and discriminate between the poor and the reach in offering the plea bargain services, In this Bamwine cautioned the State Attorneys to ensure that these people are helped to get justice, he however said, “ This process is not aiming at dishing you out of prison, no and don’t think that if you killed someone then you will be given a few years, no but you can’t be hanged, but a reasonable sentence can be given to you, and we shall not hesitate to dismiss cases where witnesses are summoned to appear before court and fail to show up for two times, am very optimistic that if this is streamlined it will deliver efficient and quick justice, peace and stability,
Duncan Gaswag the Resident Judge for Mbarara sacket that covers 11 districts of Kiruhura, Isingiro, Ibanda, Bushenyi among others, said that in this area they have only two judges to handle over 1132 criminals cases which is too much work for them, “what has delayed this process is that we have had some in mates who have wrongly advised others and this causes them to withdraw from the process, some lose interests , like in the refugee cases some do relocate, so much sensitization is required among the defendants”
Judiciary has set a task force that involves lawyers from private law firms, being helped by Prof. Jim Gash and his team from Pepperdine University in California, USA

Breaking:England Is Out Of Europe For The Second Time In One Week

MUST don challenges scientists on professionalism, don’t base on workshops findings