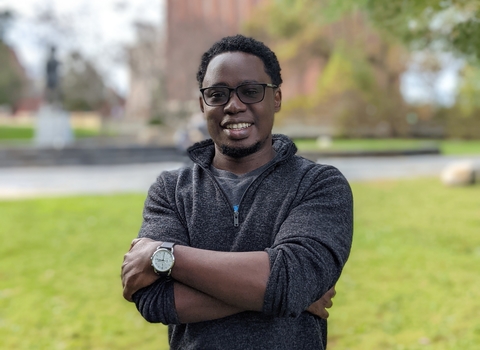 Mr Aggrey Muhebwa,An electrical and computer engineering (ECE) doctoral candidate is the first University of Massachusetts Amherst student to be awarded a prestigious international scholarship from the Intergovernmental Panel on Climate Change (IPCC), the United Nations body responsible for assessing the current state of scientific, technical and socio-economic knowledge on global warming.

Aggrey Muhebwa,who comes from Sheema district is one of 33 doctoral and post-doctoral candidates to receive the two-year, 30,000-euro award from the IPCC. He is a graduate research assistant in the lab of Jay Taneja, whose work explores using machine learning to measure and manage infrastructure systems such as energy, transportation, water and sanitation, in industrialized and developing regions.

This year’s class, selected from among 320 applications, was the award’s largest to date. Twenty-seven of the 33 scholarships — including Muhebwa’s — were announced during an Oct. 29 ceremony held in Monaco by the Prince Albert II of Monaco Foundation, a scholarship sponsor. Muhebwa was unable to attend the ceremony and officially received his award in December.

The IPCC shared the 2007 Nobel Peace Prize with former U.S. Vice President Al Gore for its efforts to promote climate change. It used the prize money to establish the IPCC Scholarship Program, which has been awarded biennially since 2011 to a select group of students from developing countries or those with economies in transition, such as Niger, India, Rwanda, Bangladesh and Ethiopia.

Qualified applicants must be Ph.D. students who have been enrolled for at least a year or are undertaking post-doctoral research. They also must be citizens of developing countries whose research is related to climate change topics such as biodiversity, water management, terrestrial carbon cycle and agroforestry.

Growing up in rural Uganda, where electricity was only available a few hours a day, a few days a week, Muhebwa saw firsthand the life-changing effect a stable, renewable energy source could have on remote communities.

“In those three hours, that’s how people are going to do things like get corn milled, and other critical things that require electricity,” Muhebwa says.

For his scholarship application, Muhebwa submitted the cross-disciplinary hydrology work he is conducting with Taneja and Colin Gleason, a civil and environmental engineering professor. Much of Taneja’s research is focused on developing machine learning approaches for sustainable decision-making in the developing world, while Gleason’s research group studies river hydrology to learn how it is affected by climate change.

“Our work aims to leverage over 100 years of hydrology data, using new-fashioned techniques in machine learning to solve problems better, faster and with more accuracy,” Muhebwa says. Such problems include the ability to provide a stable energy source in areas without the resources to establish the infrastructure.

One of his research projects proposes using electric fishing boats as anchor loads to offload extra energy generated by solar mini-grids in areas where traditional energy sources can’t easily exist, such as on the hundreds of islands in Lake Victoria, Africa’s largest lake.

Because the energy they generate cannot be practically stored for later use, solar systems are not the answer, he says.

“We could set up a mini-grid and use it to generate electricity for cooling ice, drying fish, home uses, and commercial uses, but mostly use it for charging electric boats,” he says.

Equatorial Power is partnering with UMass Amherst and French utility company Engie to build this mini-grid on Lolwe Island and has plans to scale the project across Lake Victoria.

“My work is not just for the developing world, it can literally affect the whole world, because climate change affects everyone,” Muhebwa says. “It’s just not about one more research paper — it can help change the world.”