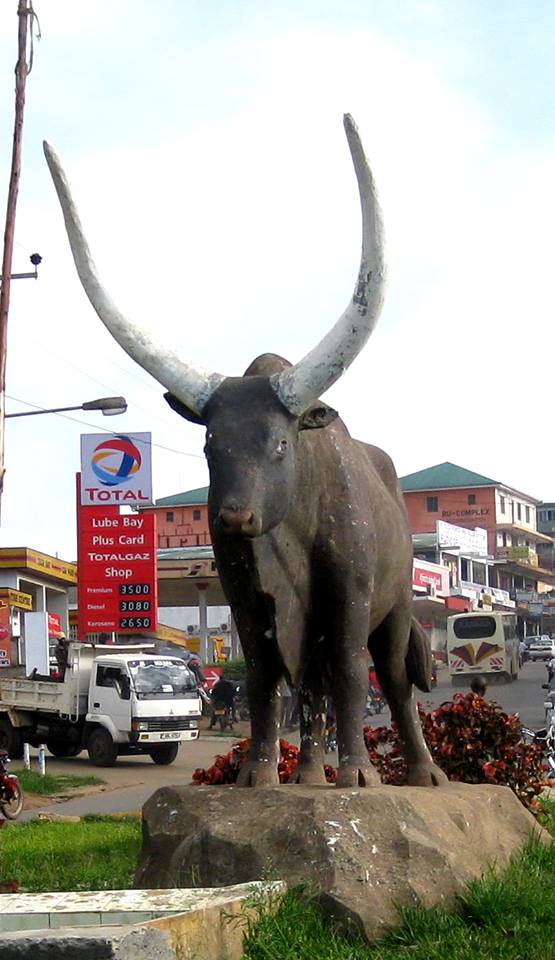 Mbarara City has been free of inconceivable controversies in the recent past but now, the leaders in the area are battling to handle a scandal of the year related to the Ankole Cow Statue.
The decision by Mbarara Municipality leadership to design the main round-about (located on Masaka – Mbarara Road) with metallic, horn shaped structures, has to say the least annoyed the usually peaceful people of Mbarara and those who know and have Mbarara at heart.

In a dramatic twist of events, authorities have chosen to erect the metallic structures- surrounded by glittering tall structures that light at night but these have covered the statue of the Ankole Long horned cattle that has for long been the symbol of Mbarara.

Mbarara News has established that there are plans to have the Ankole Cow statue maintained but this will be behind the metallic structures meaning it will not be clearly visible. We also understand that this project is worth over 300 Million Shillings.

Whereas this looks like a good beautification move, many people are rooting for the maintaining of the identity of Mbarara and the Ankole Region

News of this development started making rounds on Monday but by Tuesday lunchtime, social media was awash with comments from different people about this move. Majority of the comments were critical of this development; with many calling for the restoration of the real, true identity of Mbarara City.
Mbarara Municipality Mayor Robert Kakyebezi and those close to him remain tight lipped about this but they are expected to comment on this developing issue shortly.
Here is a sample of what different people said about the new design of Ahamahembe Gente.

As far as this issue is concerned, this is just the beginning and more twists and turns are expected in the coming days. It remains to be seen if the leaders will swallow their pride and listen to the people.
What is Majority of the Mbarara People and Ankole people want is the removal of the metallic structures as well as the tower in the middle of the round-about to pave way for the establishment of a clearly visible Ankole Cow statue.

Mbarara News supports such efforts to re-establish a clearly visible Ankole Cow Statue at that roundabout.
The beautification structures can be put on other places in Mbarara like the Northern by-pass roundabout near Makenke or at the roundabout on the Mbarara bypass- Kasese road junction, on high street adjacent Shell Ankole or on the Kabale- Bushenyi road junction.

Towns in the Western region like Kabale and Fortportal have clear statues that identify them at the key roundabouts.
Mbarara should not be different.

Why NRM Lost The Rukungiri By-Election

Kasese Shooting was a revenge, due to the Previous Attack on UPDF